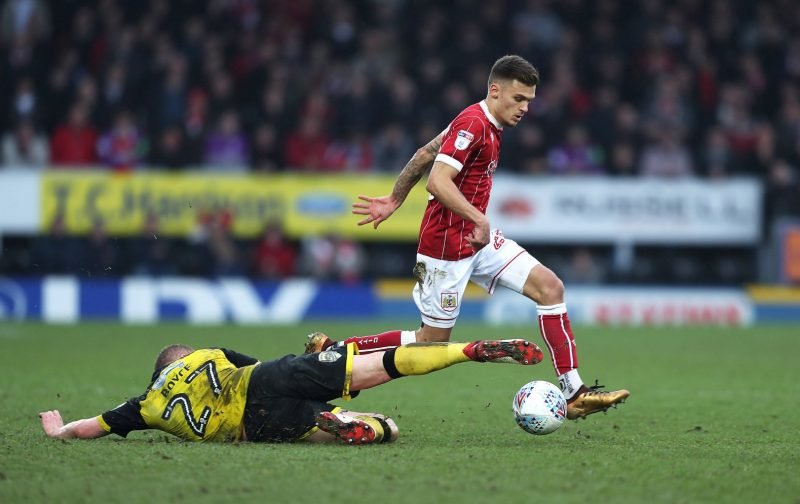 It’s been a busy weekend for Bristol City, a trip to London to face the Football Association, friendlies against Yeovil Town and Shrewsbury Town and there was even time to announce a new deal for attacker Jamie Paterson.

The 26-year-old has signed a new deal at Ashton Gate keeping him at the club until the summer of 2021.

Having arrived from Nottingham Forest for an undisclosed fee back in August 2016, the player now has 54 starting appearances to his name, with a further 16 showings from the bench, and in that time he’s contributed eleven goals. 46 of those appearances came in the season of 2017/18, as did six of his goals and he’s looking to kick on from there in 2018/19.

Speaking to the Official Site after penning his new terms, he explained.

“I am delighted to get the deal sorted. I’m now settled and I am looking forward to the future. I have loved every minute of it here. It’s a great club with great fans, great people in and around the place and I’ve really enjoyed my time here, so I want to be involved in the future of the club.”

“We are extremely pleased Pato has extended his current deal. We know how good he can be when he is on fire in this division and he is a real creative spark who will be really important to us in the coming campaign and beyond. The new deal gives him a chance to settle even further and concentrate on playing his best football.”

Whilst some fans had doubts on social media as they reacted to the news, it certainly pleased the vast majority of Robins with the comments supplied.

Club have a huge amount to change to acheive that #BristolCity

Let's hope he has a better season this season